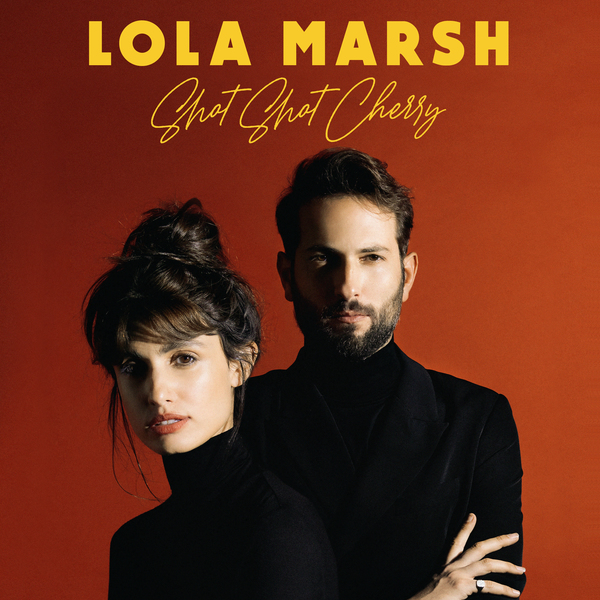 1.Shot Shot Cherry
2.If You Wanna Be My Lover
3.Love Me On The Phone
4.Never Grow Up
5.Satellite
6.Because of You
7.Going Back
8.Run Run Baby
9.Chasing Storms
10.This Is Not The End
11.End of the World

There was a certain amount of subterfuge involved in the making of Lola Marsh’s new album, Shot Shot Cherry.

Singer Yael Shoshanna Cohen and multi-instrumentalist Gil Landau, the core members of the Israeli indie-pop band, started work on their third LP while each was locked down in their respective apartments in Tel Aviv during the initial wave of the pandemic. At the time, most people were permitted outside only to walk their dogs or to buy medicine. Desperate to team up on new music and lacking a dog to walk, one would hurry to the other’s apartment with a bag of medicine, looking as if they were returning from the pharmacy.

“It was a trick of all the young Tel Avivians,” Cohen says, laughing.

Their clandestine songwriting sessions evoked Cohen and Landau’s earliest collaborations as Lola Marsh, when they would work on new music in a room together. “We wrote songs how we used to, and explored writing songs with different vibes,” Landau says.

One of those vibes is a dance-floor sound that’s new for Lola Marsh. A pulsing beat and swirls of synthesizers give the title track a sleek club vibe, while a surging rhythm and Cohen’s sultry vocals propel “Run Run Baby,” an ode to dating younger men that namechecks Madonna and Demi Moore. The dance aesthetic was a natural outgrowth of having to spend so much time inside when Cohen and Landau began working on the follow-up to their 2020 album Someday Tomorrow Maybe, which has surpassed 50 million Spotify streams.

“I was officially missing the dance floor during corona,” Cohen says. “We were on tour in Europe, and we did seven shows out of what was supposed to be 30 before we came back home and went straight into quarantine. I was inside with four walls and a little balcony, and I was playing songs in my house and dancing alone.”

For his part, Landau put aside his guitars in deference to his wife, who was locked down with him. “I was with my computer most of the time, just making beats and exploring stuff that I’ve never done before,” he says.

Lola Marsh pushes their sound in new directions on Shot Shot Cherry, to be sure. Yet they also dig deeper into the riveting indie-pop style they began honing after meeting in 2011 at Landau’s birthday party, where they first sang together a cover of “Jolene.” After releasing the EP You’re Mine in 2016, their first LP, 2017’s Remember Roses, amassed more than 72 million Spotify streams and garnered praise from NPR, Paste Magazine, NYLON, Observer, Interview magazine and the New York Times. Along the way, Cohen and Landau co-wrote a song for the 2016 Kevin Costner film Criminal, recorded a cover of Frank Sinatra’s “Something Stupid” for the AMC series Better Call Saul in 2018, and contributed their song “You’re Mine” to the 2018 Netflix movie To All the Boys I’ve Loved Before. Their momentum continued with Someday Tomorrow Maybe, a collection of confident, tightly focused songs full of melodic hooks. One of them, “Only for a Moment,” appeared in the 2022 movie Purple Hearts and the comedy-drama series Atypical, both on Netflix. In addition, the ABC action-drama series Station 19 included Lola Marsh’s song “Hold On.” The band also lent its music to commercial spots for eBay, the California lottery and the fragrance company Guerlain.

This time, alongside the dance floor bangers on Shot Shot Cherry, Lola Marsh’s distinctive style is often a vehicle for downhearted sentiments. Cohen sounds wistful over simple acoustic guitar and bass on “Because of You.” The song was inspired by Landau’s late sister, Anat, and his wife’s mother, Tami, who died while Lola Marsh was writing songs for the new album.

“She was a unique woman, and so was their relationship,” Landau says. “I remember coming back to the studio after the funeral, I told Yaeli about her and about their special connection, and I burst into tears. Unfortunately, I also know the feeling of losing someone close: 14 years ago my eldest sister, Anat, died unexpectedly. She was the greatest person I knew, and her absence is something I take with me everywhere. This song is dedicated to my wife, and to these two women — wherever you are, I hope you enjoy the music.”

Elsewhere, “Going Back” dials in an imposing noir sound with an orchestral-size musical arrangement and layers of backing vocals. Landau peels off towering guitar leads on “End of the World” as Cohen matches him with layers of wordless vocals on the chorus.

“We started off at the beginning writing sad songs, some of the saddest that we’ve ever written,” Landau says. “It was a depressing time with all the uncertainty, especially as musicians wondering what would happen to our career. And then after two weeks of really sad songs, we thought, ‘Alright, goddammit, snap out of it.’”

Though there’s definitely a balance on Shot Shot Cherry, it’s not one that Cohen and Landau had mapped out in advance. Instead, the mix of songs on the album reflects the blend of emotions and musical impulses they experienced during what felt like a crazy, dangerous time.